Volkswagen has released a set of design sketches that anticipate the look of the ID.4, the electric compact SUV set to debut next month.

The design of the ID.4 features powerful proportions, flowing lines and a sculpted rear combined with a careful aerodynamic study that resulted in a drag coefficient of only 0.28.

Set to compete in the compact SUV segment – the largest market worldwide – the car will be built initially in Europe and China and will later be produced in the U.S.

Head of Design for the Volkswagen Group Klaus Zyciora commented “The ID.4 represents an electric design evolution. Its exterior design is clean, flowing and powerful. It appears strong and self-confident in a new way. This is mainly due to the seamless, aerodynamic style of our electric vehicle family, which we have transferred to the SUV segment for the first time with the ID.4.

“This means that gentle, soft transitions alternate with sharp, clear separating edges. The design looks as if shaped by the wind itself. At the same time, the modern look of the ID.4 can be seen by the characteristic headlights and the signature light between them.”

“The design evolution of the ID.4 also means that we have focused very strongly on the aerodynamics,” explains Zycoria.

The ID.4 achieves an excellent drag coefficient of 0.28. The most important factor for this is the flowing shape of the vehicle body and passenger compartment, which is significantly drawn in towards the rear. This is complemented by many precisely executed details. For instance, the tail light cluster and the large roof spoiler ensure that the air flow is cleanly separated.

The ID.4, the first all-electric SUV from Volkswagen, is the second model based on the new modular electric drive matrix (MEB), following the ID.3.

Thanks to the low drag coefficient of 0.28 and scalable battery system, ranges of more than 310 miles (according to WLTP) are possible.

The new SUV will initially be launched with rear-wheel drive, and an all-wheel drive variant will follow at a later date The high-voltage battery is positioned in the underbody to create a low centre of gravity for optimal driving dynamics as well as extremely well-balanced weight distribution.

Hyundai has released the first teaser images of the upcoming 2022 Santa Cruz, set to debut at an online event on April 15, 2021. 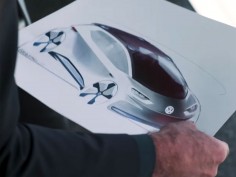 Volkswagen ID.3: video series on the design and development

Volkswagen has launched a weekly video series titled"Becoming ID.", offering a look behind the scenes of the ID.3 development. The first episode is led by chief designer Klaus Bischoff.